Heather Branstetter’s book Selling Sex in the Silver Valley: A Business Doing Pleasure (published May 15, 2017 by The History Press), is about the history of sex work in northern Idaho from 1884-1991.

Book Synopsis and Back Cover Copy

“The widest open, most flagrantly and shamelessly wicked city for its size”

Once the largest silver producer in the world, Wallace became notorious for labor uprisings, hard drinking, gambling and prostitution. As late as 1991, illegal brothels openly flourished because locals believed that sex work prevented rape and bolstered the economy, so long as it was regulated and confined to a particular area of town. The madams enjoyed unprecedented status as influential businesswomen, community leaders and philanthropists, while elsewhere a growing aversion to the sex trade drove red-light districts underground. Dr. Heather Branstetter’s research features previously unpublished archival materials and oral histories as she relates the intimate details of this unlikely story.

“The book doesn’t glorify sex work, but doesn’t make the working girls out to be victims, either…. It’s not rainbows and kittens, but it’s not sordid details of shameful sex, either. Heather’s work is matter-of-fact.”

On Episode 4 of the King’s Guide, Chuck King introduces you to Dr. Heather Branstetter, author of the fascinating book, Selling Sex in the Silver Valley: A Business Doing Pleasure. What does it mean when a community agrees that “you don’t have to obey the laws, but you do have to follow the rules?”

Heather’s book gives readers an idea of who the women of Wallace, Idaho were and what they contributed to their community’s identity and fortune during a century of mining, hard drinking, illegal gambling, and yes, prostitution. Read her article on her book, published in Nostalgia Magazine, online here.

Click the photo below to view the 8 minute video: 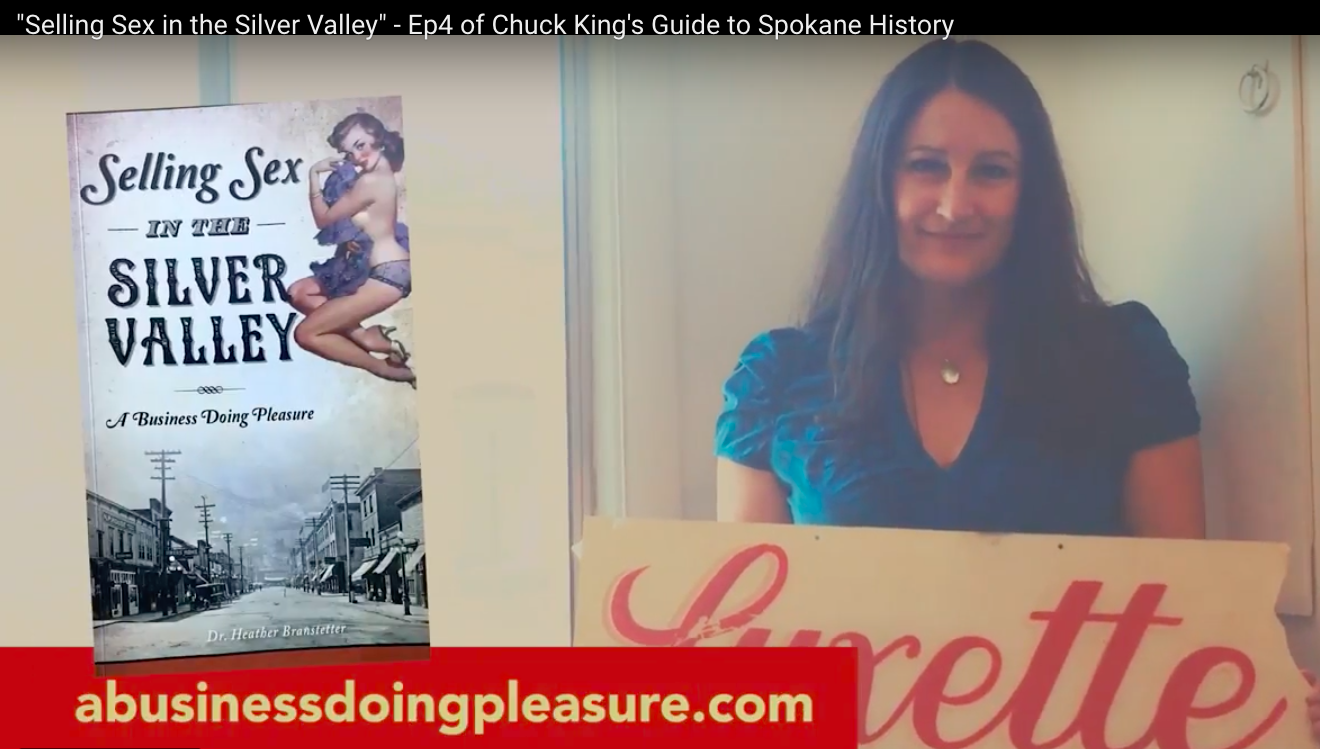 Jennifer Bauer’s write up in the Inland 360:

You explore how the brothels and madams followed a strict code of conduct.

Branstetter: They were very good about (keeping a clean image). They advertised they had regular doctor’s visits and there was a ritual of cleanliness involved in individual interactions. They cultivated what was almost a fetish for cleanliness. They’d wash the men before and after. A bubble bath was a very popular service.

Everyone said ‘they’re very clean and well regulated. They check in with the sheriff’s office and with the doctor. They’re not hanging out in bars or on the streets, not like those street walkers in Spokane,’ because God forbid, we be anything like Spokane (laughs)….

Did writing this book change your opinions on sex work?

Branstetter: Yes, definitely. I went into the project without an opinion on the politics of it. Today there’s a lot of discussion about how sex work is exploitive to women but I also think for some women it’s the only option. I’m in support of decriminalization.
It was not good for the women; if they had other economic choices, they took them. (Records show) that some served in the military during World War II. They were Rosie the Riveter. They were involved in sex work before WWII, the military paid a good wage, then they went back to sex work after.

Times have changed a lot since then, women have many more opportunities, but for some it’s the only option. I met a woman the other day who said that was her case. She said Wallace did it the right way. Women were running the businesses. We tried to keep the pimps out of town. We tried to keep it women-run and safe for women.

“Holding few punches and revealing many of the gritty realities of the trade, Branstetter explains that regulated prostitution was generally accepted by the local populace as ‘necessary’ to keep the many single men in the area occupied and entertained…. the book does an excellent job of showing that prostitution in Wallace had to endure many ebbs in business that came with an ever changing sociological landscape…. This collection of stories and conversations gives the reader a variety of perspectives that can suck you in with intrigue — especially if you are from the area…. The variety of primary sources gathered in the second part is impressive, presenting multiple points of view on a business that prided itself on its discretion. From former maids and customers to family members of the actual madams and girls, no stone seems to have been left unturned in regard to finding information on the Wallace sex trade.”

“For the record, Heather Branstetter’s book on the history of prostitution in Wallace does better, and more readable, sociology than a lot of bona fide sociologists do! Her background and training in the humanities only makes the book’s rich register of cultural commentary all the more revealing. This is a really wonderful book and study.”

“I finished the book several days ago and have been thinking about it since. Girl, you did a real piece of work here!!!

Prostitution is not an easy subject to write about. You did a superb job dealing with a very touchy subject. I liked the format. I appreciated [that] you did not edit the input of others to make it fit your book, but called a spade a spade. There was one notable exclusion in the book. There was a total lack of political correctness!! You told it like it was, not as some would wish it had been.

I am sure the book wont hit the top of the New York Times best sellers list, but you have done the town of Wallace a big favor to bring their unique situation into the public eye and at the same time you have made their history readable and available to the public.  I respect you for the way you handled the story and the individual input.”

A Silver Valley native, Heather Branstetter graduated summa cum laude from the University of Idaho before going on to earn a PhD in rhetoric and cultural studies from the University of North Carolina in 2012. Branstetter’s academic research article discussing the more notorious aspects of her hometown won the Charles Kneupper Award for “the most significant contribution to scholarship in rhetoric” in 2017. She has been a member of Wallace’s City Council since 2016, serves on the board of the Barnard-Stockbridge Museum as programming director, and is the executive director of the Historic Wallace Preservation Society. To schedule an event or request more information, you may reach her by sending an email to heatherleebranstetter@gmail.com or by visiting her Facebook Author Page.

From D.F. Oliveria, of the Spokesman-Review: