So, lots of big developments lately…

I visited Dolores Arnold’s grave in Tacoma, Washington this week. She’s buried next to her mother, who died when she was six, and her sister, who died last fall. Here are pictures: 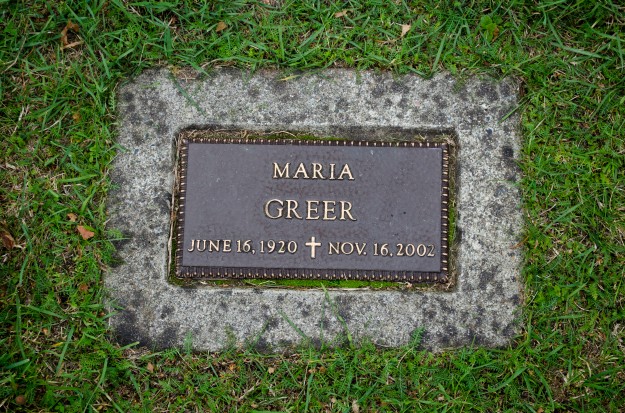 I felt sad and humbled when I got there and saw how small the grave marker is. It’s about the size of a book or iPad, understated for a woman who was the most famous and beloved madam in Wallace’s history. The grounds at the Calvary Cemetary were very well-kept. Standing there on the damp ground I could smell cut grass, wet dirt, and fallen leaves. Planes flew into and out of McChord Air Force Base just to the Southeast. Birds chirped. It tried to rain but eventually gave up.

Some of you might not have heard yet: this summer, I resigned from my job as a professor to move back to Wallace and focus most of my time on the book. It was a big decision and definitely the right one for me. Needless to say, access to primary sources was pretty tough when I lived 2,400 miles away in Virginia. It was also difficult to build face-to-face relationships with research participants from across the country. It’s been great to live back in the valley again. I just picked up a job that will allow me to work on the project a lot more and this week I’ve been working on a book proposal for publishers. Wish me luck!

You might have noticed some small changes with my site. My new web address is “ABusinessDoingPleasure.com” although findheatherlee.com still forwards to it for at least another year. I changed my domain name because I think I finally settled on a book title. I also formed my own company, so now I’m officially the manager at findheatherlee media, llc. That’s kind of exciting. Next comes a Facebook site for the project (stay tuned for the chance to win a prize for liking the page)…

I’ve also begun to advise the writing club at the jr./sr. high school. As a result (thanks to Val), I found out about this writing tracker-motivator app called Writeometer that is pretty cool. I love how you can set your deadline and then see how many words per day you need to write to get there. Or you can enter in the words per day and then hit the calculator button to see how many days it will take to complete the project.

And finally, after much written correspondence and a phone conversation with the folks at the FBI, I am happy to announce that they will be sending 950 pages worth of information about the 1991 raid. Most of that is a report for the prosecutors written by one of the special agents who was investigating the case. It was looking like I was going to have to pay a huge amount of money for the files (and Dean Cooper at the 1313 offered some really helpful support—thank you so much!) but after talking with a researcher at the FBI over the phone, I decided to reduce the request to 950 pages in order to speed the processing and limit the amount of information that would be heavily redacted. When I originally put in the FOIA request, I’d hoped to see the evidence they’d gathered for the trial, but the researcher said it had been “dispositioned,” which means that it was either destroyed or returned. Regardless, I’m really looking forward to checking out the agent’s report and will post an update as soon as it arrives.

Well, that’s about it for today. In the future, though, I’ve got a special post coming up. I’m trying out something a little different for this one. This summer, I met up with Seattle-based escort Maggie McNeill for a conversation about sex work. She writes a popular blog called The Honest Courtesan, and we met up a couple weeks before Amnesty International came out in support of decriminalizing sex work, a decision with which she agrees. The profession has received a lot of negative publicity in the meantime (people often conflate sex work with trafficking) and I think Maggie’s perspective balances things out a bit. I recorded our conversation and am trying to get it into podcast shape, but it was a long talk, so that may take me a bit longer. In the meantime, go check out her site and look forward to more here soon.

3 thoughts on “a business doing pleasure”

Join 551 other subscribers
Follow A Business Doing Pleasure on WordPress.com